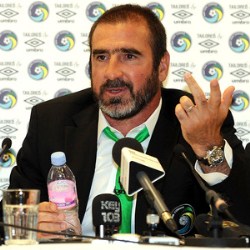 Eric Cantona insists that Manchester United should buy Wesley Sneijder as the Dutchman reminds him of himself.

The reigning Premier League champions have been linked with a £35 million move for the Inter Milan star but his club is unwilling to sell.

The former Real Madrid playmaker is seen as the perfect replacement for Paul Scholes, who retired at the end of last season.

Frenchman Cantona, who is in town for former team-mate Scholes’s testimonial, said: “Sneijder is one of the best. He will be great for the team.

“Sneijder is an excellent player. He is what Manchester United needs. There’s no one like him right now.

“He’s strong. Sometimes he reminds me of myself.”

Cantona is now director of soccer at New York Cosmos, who will face a United XI on Friday. Cantona will manage the Cosmos for the match.