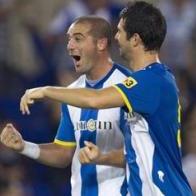 Pandiani, who came on as a substitute with a quarter of an hour remaining, latched on to a rebound after Miguel Angel Moya could only parry Sergio Garcia’s effort.

Until that point it had looked as if the hosts, who had dominated the contest, particularly in the second half, would be frustrated by some obdurate defence from the visitors.