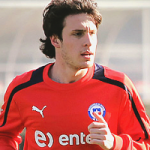 It has been reported that the race for Manchester United striker Angelo Henriquez is heating up.

Spanish side Espanyol are rivalling Real Zaragoza for the services of the 19 year old Chile international.

El Mundo Deportivo revealed that the Barcelona-based club are to hold talks over a temporary move for the former Universidad de Chile striker with United said to be open to loan approaches after he finished last season with Wigan.

Henriquez joined Manchester United 2012 and is yet to make a first team appearance.