Reports are out claiming that Espanyol president Joan Collet says they haven’t heard from Real Madrid for Kiko Casilla. 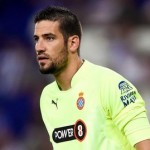 The former Castilla goalkeeper is being linked with a return to Real.

But Collet says: “It’s nothing but lies. There’s nothing. I’m not only surprised, I am completely amazed. I have spoken quite a few times with [Real Madrid General Director] José Ángel Sánchez over the past few days and he did out one question to me but we haven’t sat down to negotiate.

“All I know is that Kiko will turn up at midday to go on the summer stage with the rest of the squad. I don’t know what will happen tomorrow but right now, there’s nothing and there won’t be for the price that’s being bandied about.”