It has been reported that Leicester City are weighing up offering new terms to Esteban Cambiasso. 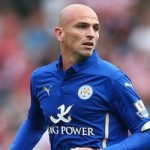 The People reported that the 34 year old joined the Foxes in August and has made an impressive impact in the dressing room.

He has been involved in discussions with manager Nigel Pearson over the team’s set-up as well as helping players adjust to life in the top-flight.

And his influence has been so well received that he could be penning a new deal well before his current one expires.

The former Argentine international has a long-term plan to become a coach in England so is embracing his role at the club.