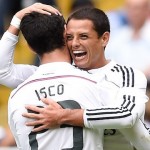 It has been reported that former Stoke City winger Matty Etherington loves the idea of the Potters moving for Manchester United striker Javier Hernandez.

Etherington wrote in The Sentinel: “Stoke could ever sign Javier Hernandez that wouldn’t half get the pulses racing in and around the club.

“Is it a realistic target? Yes, I think it is when you consider that in January they were in for Xherdan Shaqiri when he was at Bayern Munich.

“If they are serious about reaching out for that kind of player then someone like Hernandez does come into the equation.

“I guess we’ll just have to wait to see what his and Manchester United’s intentions are when his loan spell at Real Madrid ends shortly.”