Eto’o : Balotelli Must Listen To Advice In Manchester City! 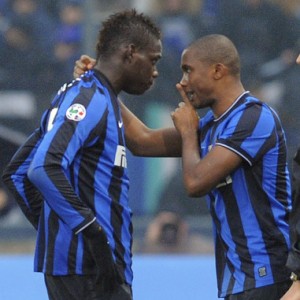 Samuel Eto’o has warned Inter Milan teammate Mario Balotelli he needs to change his attitude if he wants to be a success at Manchester City.

Manchester City are keen to bring the rebellious young striker to Eastlands this summer for a fee of around £25million while Inter are thought to be willing to let Balotelli go after a string of fall-outs with team-mates and management.

And Cameroon international striker Eto’o, himself notoriously tempestuous, told the Daily Star Sunday: “He has the potential to go on and be one of the best players in the world but he must sort some things out in his head.

“The older players at Inter Milan have always tried to advise him. I am not sure how successfully but, if he is to be a success and not waste his career he must listen to the players at Manchester City. This is the chance for a fresh start.”


Villarreal To Offer Giuseppe Rossi Back To Manchester United