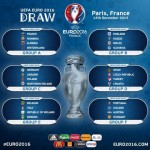 The UEFA Euro 2016 draw is now complete. For the first time in history, 24 countries will be competing in the European championship for soccer. Here are the results from Paris, France.

Group stage play will begin on June 10, 2016. Although every group is stacked, Group E will be the most difficult out of the six groups with Belgium, Italy, Sweden, and Ireland.