James Milner scored from the penalty spot to send Liverpool through to the last 16 of the Europa League with a 1-0 win over Augsburg. 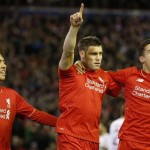 The England midfielder scored the spot-kick after Dominik Kohr was penalised for handball as he jumped for the ball following a corner.

Jurgen Klopp’s side missed a string of chances and were unable to kill the game off despite having Daniel Sturridge, Philippe Coutinho and Roberto Firmino up front.

Their German opponents, who had eight players missing through injury, spurned a couple of golden opportunities in either half to cause a shock.

The home side, who have now kept three clean sheets in a row, limped over the line to win 1-0 on aggregate and give themselves a boost going into Sunday’s League Cup final against Manchester City. Liverpool Target Miralem Pjanic Only Thinking Of AS Roma Stay