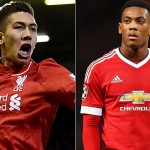 Naming Philippe Coutinho, Daniel Sturridge and Christian Benteke on his substitutes’ bench for Sunday’s 2-1 win at Crystal Palace, Klopp acknowledged a positive juncture in his first months as Liverpool manager.

Heading into Thursday’s encounter with the Red Devils, Klopp finds himself in a similar position, with only Jon Flanagan and James Milner unavailable from the side that snatched victory at Selhurst Park.

Milner is set to miss out with a virus, while Flanagan is out of contention having been omitted from Klopp’s 25-man squad for the competition.

Lucas Leiva, Kevin Stewart, Jordan Rossiter, Joe Gomez and Danny Ings remain on the sidelines, but otherwise Klopp has a strong squad to select from.

Van Gaal finds himself in a less favourable position, however, as the Dutchman navigates an injury crisis at the business end of 2015/16.

Wayne Rooney, Bastian Schweinsteiger, Will Keane, Luke Shaw, Ashley Young and Phil Jones are all still out, though the latter will be pushing for a return in the second leg, with Van Gaal likely to turn to his youth ranks once again.

United’s problems will be magnified on Thursday night, with both Jesse Lingard (suspended) and Adnan Januzaj (cup-tied) added to the list of absentees.

Van Gaal is hoping to call upon Ecuadorian winger Antonio Valencia, though, with the 30-year-old set to take a place on the bench, as his manager revealed on Wednesday.