Manchester United recovered from the shock of conceding the opening goal to rout Midtjylland 5-1, with late starter Marcus Rashford scoring twice on debut after replacing Anthony Martial before kick-off. 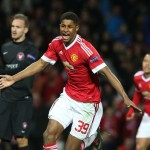 Martial tweaked a hamstring during the warm-up, handing a debut to the 18-year-old moments before the start.

And he grabbed his opportunity with both hands, scoring twice in the second half as United bounced back from a goal down to reach the last 16 in style.

But the lead lasted less than five minutes before Nikolay Boudrov turned Memphis Depay’s cross into his own net and although Juan Mata saw his penalty well saved just before the break, United ended the half in the ascendancy.

Rashford opened his United account midway through the second half, turning in Mata’s excellent cutback before grabbing his second after good work from Guillermo Varela.

Ander Herrera added a late penalty before man-of-the-match Memphis completed the drubbing with a fine finish, drilled into the bottom corner. Man Utd To Include Hernandez, Nani In Bid For Valencia’s Nicolas Otamendi