Reports are out claiming that Chelsea’s former team doctor Eva Carneiro is set to sue the club for constructive dismissal. 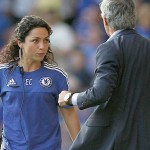 Press Association are reporting that Carneiro has issued legal papers to the club, which looks likely to end in a hearing if Chelsea are unable to settle out of court.

When Carneiro was asked by Sky Sports if the reports were true the Portuguese doctor declined to comment.

The case follows her dismissal from the Stamford Bridge outfit after being criticized by Jose Mourinho for running onto the pitch to treat Eden Hazard in the Blues’ opening fixture against Swansea. Mourinho was cleared of using discriminatory language towards Carneiro by the Football Association, but the doctor has been critical of the FA process.

Carneiro said earlier this month: “I was surprised to learn that the FA was allegedly investigating the incident of August 8 via the press. I was at no stage requested by the FA to make a statement.”

“I wonder whether this might be the only formal investigation in this country where the evidence of the individuals involved in the incident was not considered relevant. Choosing to ignore some of the evidence will surely influence the outcome of the findings.”

The claims filed by Carneiro’s lawyers will need to be addressed by the 8th November and could see the west London outfit attempt to settle-out-of-court.