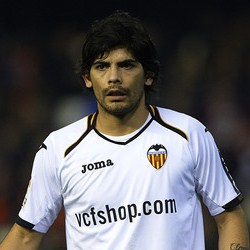 It has been revealed that Valencia midfielder Ever Banega will be out for six months after being injured in a car crash.

The Argentine international star is facing a long spell on the sidelines after breaking the tibia and fibula in his left leg in a freak car accident on Sunday.

Banega, now age 23, will undergo surgery on the injury on Monday and Valencia said in a statement that the Argentina international could be absent for around six months, although they will give an update after the operation.

“Although Valencia only confirmed that Banega had been hurt in an accident involving his own car after leaving training, Spanish media are reporting that the injury occurred when the midfielder failed to put the handbrake on at a petrol station and, after the car moved, his leg was caught between the wheel and the curb.”

David Villa Hopes To Join FC Barcelona In The Summer