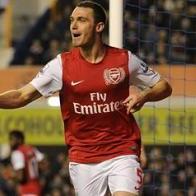 Arsenal leapfrogged arch-rivals Tottenham into third place in the Premier League table after holding on for a 1-0 win over Everton at Goodison Park.

Thomas Vermaelen headed home a corner with eight minutes on the clock, an advantage they retained for the remainder of an enjoyable back-and-forth contest.

There was controversy later on in the first half, however, when Royston Drenthe had what appeared to be a legitimate equaliser ruled offside.

Nonetheless, the Toffees were unable to find a way back into the contest after that despite creating a number of chances, and remain in the top half of the table only via goal difference.