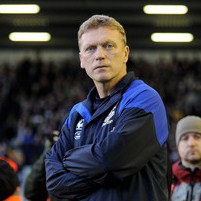 Tottenham succumbed to a third successive Premier League defeat for the first time under Harry Redknapp as a Nikica Jelavic goal condemned them to a damaging 1-0 loss at Everton.

Following back-to-back losses to Arsenal and Manchester United, Tottenham’s grip on third place – which just weeks ago had seemed unassailable amid talk of a possible title challenge – was loosened further when Jelavic scored after only 22 minutes of his home debut at Goodison Park.

Everton resisted a determined challenge from Spurs in the second half to secure the win and a ninth game without defeat in all competitions for David Moyes – who celebrates 10 years in charge of the club next week and has been linked with Spurs in the eventuality that Harry Redknapp is appointed by England.

However, before claiming a hard-fought victory the Merseysiders had to endure seeing former striker Louis Saha agonisingly strike the post in injury time as the Frenchman was left disappointed on his first return to Goodison since leaving the club in January.

This defeat leaves Spurs in third and just four points ahead of London rivals Arsenal, who have a game in hand, and Roberto Di Matteo’s Chelsea. But while Tottenham were left to rue a third successive defeat in the league for the first time since the departure of Juande Ramos in October 2008, Everton enjoyed a victory that puts them within two points of rivals Liverpool ahead of next week’s Merseyside derby.