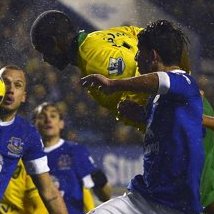 A 90th-minute header from defender Sebastien Bassong earned Norwich City a 1-1 draw away at Everton in the Premier League.

Bassong connected with a Javier Garrido free kick with seconds remaining of normal time but David Moyes was furious with the award as he felt Steve Morison went down too easily following minimal contact from Leighton Baines.

The goal was due reward for a fine second-half performance from Norwich, who looked to have little chance of taking anything from the game following a first half in which they were comprehensively outclassed, Everton leading after 12 minutes when Steven Naismith converted from Bryan Oviedo’s cross.

Norwich extended their unbeaten run to six games and sit 13th in the table. Meanwhile, Everton remain in fifth, but missed the chance to move to within a point of Rafa Benitez’s Chelsea with a win.