Everton ensured David Moyes’ return to Goodison Park ended in despair as they kept their own Champions League hopes alive with a 2-0 win over Manchester United. 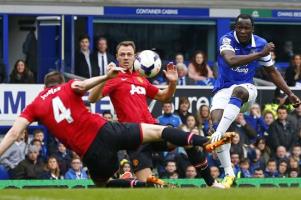 The former Toffees boss was greeted by a rendition of boos as he made his way to the dugout and his afternoon got much worse when Phil Jones handled Romelu Lukaku’s shot on 28 minutes.

Leighton Baines stepped up and made no mistake with a clinical spot-kick that he drilled straight down the middle.

The visitors struggled to carve out clear-cut chances and were undone on the counter two minutes before the break when Kevin Mirallas beat the offside trap to coolly drill home.

Everton eased through the second half and could easily have added to their tally with Steven Naismith twice going close to extending the advantage.

The defeat mathematically ends United’s hopes of reaching next season’s Champions League, while Everton remain just a point behind fourth-placed Arsenal with three games to play.