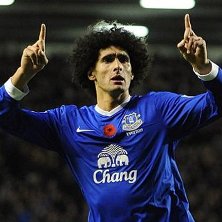 Marouane Fellaini again proved the difference for Everton as he scored and provided a magnificent assist in a 2-1 comeback win at home to Sunderland.

The Belgium star has been Everton’s best player for two seasons now and he again bailed them out of trouble, firing home a low drive before setting up Nikica Jelavic with an impudent backheel in a late three-minute spell.

Adam Johnson’s maiden goal for Sunderland had given the visitors a shock 1-0 lead, his side’s first bona-fide goal in 444 minutes of football, with their last strike an own-goal by Newcastle’s Demba Ba.

The result keeps Everton fourth, while Sunderland lie just four points clear of the relegation zone, without a win since September 29.