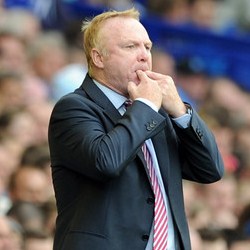 Aston Villa stayed unbeaten under Alex McLeish after a 2-2 draw at Everton in the Premier League.

Stiliyan Petrov cancelled out Leon Osman’s first-half opener only for Leighton Baines to restore the hosts’ advantage midway through the second-half.

But Gabriel Agbonlahor netted seven minutes from time to earn Villa a point.

Despite earlier unrest with a pre-match protest about the club’s financial difficulties, the home side began brightly and enjoyed the majority of the first-half possession.