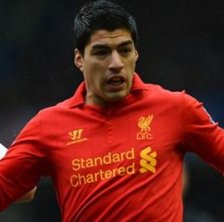 Everton came from two goals down to draw 2-2 with Liverpool in a blood-and-thunder Merseyside derby in the Premier League.

Liverpool raced into a two-goal lead thanks to Luis Suarez, whose 14th-minute shot went in off Leighton Baines before a deft header soon afterwards extended the advantage.

Everton quickly fought back through Leon Osman and Steven Naismith and had the better of a second half that saw Liverpool sit deep and look for the counter attack.

Suarez thought he had won it deep in injury time but his goal was disallowed for a foul in the build up, with the draw a fair result, a third draw on the trot putting Everton fourth for now while the Reds stay in lower mid-table.

Merseyside derbies are always fiery affairs, and usually provide goals, and this was no exception.