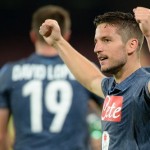 Reports are out claiming that Everton have made a move for Napoli winger Dries Mertens.

The Liverpool Echo claims that Everton have made an enquiry for Mertens.

Mertens, who players alongside Kevin Mirallas and Romelu Lukaku, is a pacey and direct wideman with an eye for goal. The 28-year-old scored 10 times in all competitions for Napoli last season, but he was not a regular starter in the side.

Reports in Belgium indicate that the Blues have made an enquiry but have yet to make an official bid for the player.

Agent Soren Lerby told Radio Crc: “We’ll see what will happen now. There are clubs interested in Dries, but at the moment I can’t say anything.”