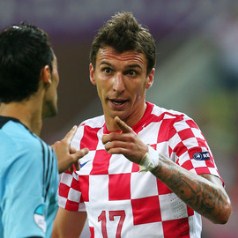 However German giants Bayern Munich are now regarded as being in pole position to land the 26 year old forward who can also play as a winger.