Reports are out claiming that Everton manager Roberto Martinez is looking forward to his side’s encounter against Arsenal at the Emirates Stadium this weekend. 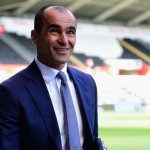 Everton suffered a disappointing 3-0 home defeat at the hands of Manchester United last weekend and things will not get any easier for the Toffees this time around as they now prepare to square off against in-form Gunners in North London.

Despite the daunting task ahead, Martinez is not getting fazed and has stated that his side are looking forward to the challenge of taking on a side fresh off a 2-0 win over German giants Bayern Munich.

Martinez said: “It was an emotional day and none of us enjoyed the footballing occasion we had in front of us and Goodison was quite emotionally charged that day and now we need to get back to having our normal dynamic and positive approach.

“Against Bayern, Arsenal showed that they can do a bit of everything. They were really, really solid against Manchester United and then they were really disciplined and well organised against Bayern Munich in the same way they were fantastic against Watford and what they did on the ball and attacking, they were very creative and very much an attacking force going forward.

“They are an outstanding, outstanding outfit. They are not one dimensional at all and have a real understanding of how to play in many different ways.” Arsenal Get Newcastle Green Light To Go For Mathieu Debuchy