Reports have emerged claiming that Everton manager Roberto Martinez has refused to be drawn on fresh rumours linking John Stones with a move to Chelsea during the January transfer window. 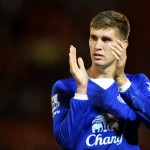 The Toffees turned down multiple big money offers for Stones from Chelsea during the summer, but it is understood the reigning Premier League Champions are preparing to resume their pursuit of the 21-year-old.

The Daily Express is reporting that Everton is preparing to offer Stones a new contract in an attempt to keep him at Goodison Park.

However, Martinez was coy when asked about the England international’s future.

“Again, it’s not a time to talk about any individuals,” Martinez said.

“It’s a good, stable position and I don’t want to touch that.

“The focus now is just on performing, playing in games; it’s not a moment to look into individual situations.”