Reports are out claiming that Everton boss Roberto Martinez has excused Tim Howard from his poor showing in Sunday’s 3-1 loss to Crystal Palace. 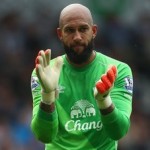 The USA international goalkeeper, who had a stellar World Cup, was responsible for Palace’s 30th-minute leveller at Goodison Park when he brought down James McArthur in the area with Mile Jedinak subsequently beating him from the spot.

Just under 25 minutes later, the 35 year old was unable to hold onto Martin Kelly’s cross which allowed Fraizer Campbell to score again for the Eagles before Yannick Bolasie wrapped up proceedings in the 69th minute.

The three goals scored by the visitors took Everton’s against tally to 13 in five Premier League games this season but Martinez insists that Howard’s spot in the starting line-up is safe despite his subpar performance on the weekend.

“I was very pleased with Tim’s performance on Thursday against Wolfsburg (in the 4-1 Europa League win) and against West Brom (2-0 last weekend),” he said.

“Obviously he had a couple of moments where he was unfortunate against Crystal Palace, but that’s what ¬happens in football.

“There are games when errors happen. He’s in a good frame of mind and he’s trained well. I don’t see any specific need to get Tim back to normal.

“He’s got the understanding and experience that those things happen in football and he’ll bounce back.” Arsenal, Everton Must Cough Up £20 Million For Wilfried Bony