It has been reported that Everton boss Roberto Martinez has blasted Chelsea´s ‘illegal’ transfer pursuit of defender John Stones. 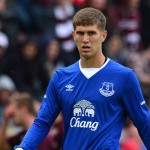 Responding to Chelsea captain John Terry´s comments that Stones would be a great addition to the Stamford Bridge club, Martinez describes Terry and his club’s approaches as illegal.

Regarding the Premier League champions’ attempt to ‘tap up’ 21-year-old Stones, Martinez said: “That is wrong – you know that is illegal. The rules don’t allow you to comment on players that are registered at other clubs in that open manner.

“That is disappointing. We don’t want to see it when other clubs speak about your players. It is wrong and it shouldn’t happen.”

Chelsea have had two bids already rejected by the Merseysiders but look likely to return with a bid topping £30 million. We Have 10 Finals To Go! – Chelsea Goalkeeper Thibaut Courtois