It has been reported that Everton boss Roberto Martinez has confirmed a new injury for striker Arouna Kone. 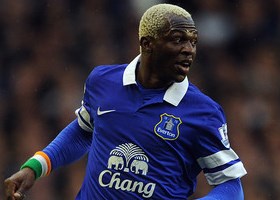 After victory over Aston Villa, Martinez explained his absence as being down to a knock sustained a week prior.

“It was during the last game against Hull City,” said the Everton manager.

“He received the ball and then got a strong challenge on his knee.

“We’re hoping that it’s not going to be too much of a serious problem, but he’s going to miss the best part of four days.”