It has been reported that Everton boss Roberto Martinez hailed the performance of Steven Naismith for their 2-2 draw with Arsenal. 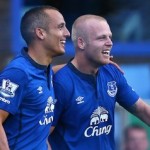 It capped a fine individual display from Naismith, one that earned the praise of his manager.

Martinez told evertontv: “It is not just the goalscoring start that he has had, it’s the overall work ethic, the understanding of the game – they were all contributing to his and our performance.

“I thought he was magnificent from the first minute to the last.

“He didn’t deserve to be in a team that left with a draw.”