It has been revealed that Everton boss Roberto Martinez was thrilled with victory over Chelsea.

Steven Naismith struck the only goal of the game just before halftime. 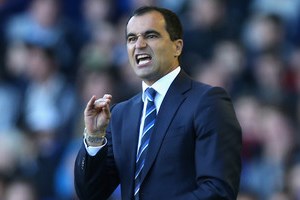 After three draws victory gave Martinez his first three-point haul as Everton manager after taking over from David Moyes in the summer.

The former Wigan boss said : “It is difficult to describe because it wasn’t the perfect performance from our point of view but when you show that character and all the attributes to be a winning side I thought we were a 10 (out of 10) in that respect,”.

“I thought the crowd understood we are still adapting and we are trying to play in a different manner and it can be difficult when you play a side like Chelsea.

“We gave two or three (early) chances probably from us not keeping the ball well enough but the way we reacted, took responsibility and defended was immense.

“It is one of those victories which will give us a lot to get the fans to understand it is going to take a bit of time to be as good as we can be but we can still win games in the process.

“As a manager you couldn’t be prouder. It gives you a great platform to carry on working and get better.

“Whatever you want to do in football you have to win games. There are many aspects you can work on in training but that confidence, belief and desire comes from winning matches and I thought today was important in that respect.

“Our previous three games were more one-sided and we didn’t get the results we deserved.

“Football always give you what you deserve and those players deserve to be unbeaten.”