Reports are out claiming that Everton are chasing Barcelona midfielder Sergi Roberto. 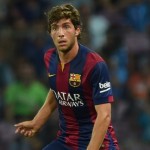 Spaniard Martinez has already signed exciting winger Gerard Deulofeu, 21 – who had previously been at Goodison on loan – for £4.2million.

Now Martinez wants Roberto – who has been on his radar for some time – on a season’s temporary transfer.