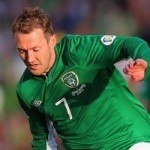 Reports have emerged claiming that Everton are set to make an offer for Spartak Moscow winger Aiden McGeady.

The Mirror claims that Everton will step up their interest in the 27 year old early next week – with a £4million bid.

Spartak Moscow are resigned to cashing in on the Republic of Ireland winger, who is in the final year of his contract.

McGeady claimed in Moscow last week that he has no plans to leave, but does want a move to the Premier League.