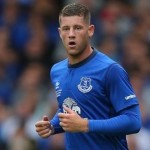 It has been reported that Chelsea have been encouraged in their pursuit of Everton star Ross Barkley.

The Daily Star reported that the Blues will make a move for Barkley next summer after Manchester City accepted he is too big a risk at £50million.

City bigwigs confirmed their interest in Barkley last week and were prepared to offer £35m.

However Everton insist the England international, 20 is not for sale and that any talks would have to begin at £50m.

City will now look at other options leaving Chelsea in pole position. Ashley Cole To Be Slapped With £250,000 Fine For Shooting Incident