It has been reported that Manchester City will have to pay a British record £60million transfer fee if they want to land Ross Barkley. 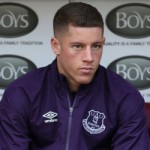 Recent reports suggest that the reigning Premier League champions are eager to sign the talented midfielder from Everton but the Manchester Evening News reports that they will have to stump up the massive aforementioned fee to do so.

The 20-year old England international has attracted interest from the likes of Manchester United and Chelsea recently but it appears as though City are set to go after him in either January or at the end of the season.

Toffees boss Roberto Martinez has stated that Barkley will not be leaving Goodison Park anytime soon but a source close to the MEN suggested that perhaps the young gun may be considering a potential future exit as Wayne Rooney did back in 2004.

“Its a Wayne Rooney situation all over again. Yet another player has comes through the brilliant academy set up at Goodison who so called bigger clubs are desperate to get their hands on,” the source reportedly said.

“Ross Barkley is Everton through and through and flourishing under Roberto Martinez.. However, he is ambitious and wants to be at a club on the biggest stage.” Shay Given Set To Return At The Start Of Next Season