It has been reported that Everton boss Roberto Martinez is eager to secure Gareth Barry to a permanent deal. 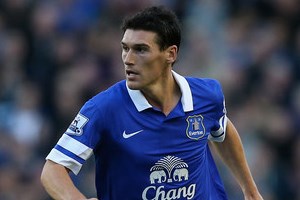 The 32 year old England international midfielder is on a season-long loan from Manchester City, where his contract is due to expire in June.

The Mail on Sunday says Martinez regards the former Aston Villa star as the club’s most influential performer this season, ahead of top scorer Romelu Lukaku and rising star Ross Barkley, and is baffled why Barry is not in the England set-up.

The Spaniard has told Barry, whose City contract runs out in the summer, he is wanted at Goodison, having impressed as a defensive shield and popped up with goals. Everton On The Brink Of Signing Monaco Striker Lacina Traore