Reports are out claiming that Everton are seeking Manchester United talks over a loan deal for James Wilson. 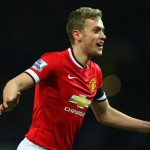 The Daily Star Sunday reported that the Toffees were quick to register an early interest for the 19-year-old striker at the turn of the year.

Goodison Park boss Roberto Martinez has had his eye on a number of Old Trafford fringe players, although Wilson remains the most likely.

Wilson, who scored twice for United last season, is also a target for West Bromwich Albion, having been recommended to them by former United midfielder Darren Fletcher.