It has been reported that Everton face competition from Arsenal for Manchester City midfielder Gareth Barry. 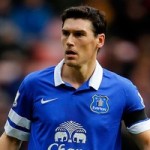 The Daily Star reported that boss Roberto Martinez has stated his intention to bring the ex-England international to Goodison Park on a permanent deal, although Arsenal boss Arsene Wenger is also thought to be keen.

Barry may be swayed by the chance to have another crack at the Champions League with the north Londoners, but Martinez remains confident he can persuade the 33-year-old to stick with the Toffees.