Reports are out claiming that Everton shot-stopper Tim Howard has hit back at those questioning his recent form, saying his ‘body of work speaks for itself’. 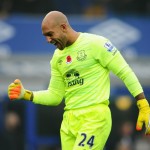 Howard’s performances have been in the spotlight in recent weeks, with only one clean sheet in the Toffees’ past seven Premier League fixtures.

However, the United States international is adamant he is not in a form slump.

“As I’ve said all along, I don’t mind the criticism because I think my body of work speaks for itself. I don’t have to say a word,” Howard said.

“Thirteen years in the Premier League, probably over 700 games in my career, over 100 games for my country and two of the best clubs in the land. The next person who does that, I’ll be impressed.

“I think if you look back at how many games? 400 games? I’d like to know how many goals (conceded) because in all of those games I probably could do better on every goal.

“In hindsight you know where it’s going and the result. I don’t have that luxury in a game.