Reports are out claiming that MLS clubs are eyeing Everton goalkeeper Tim Howard. 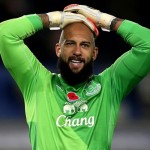 The USA World Cup legend has become a big commercial hit in his homeland and now has MLS clubs queuing to tempt him back.

According to reports by the Daily Mail, New York City FC, Toronto FC and LA Galaxy are monitoring developments with Howard.