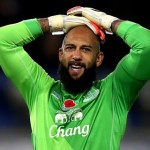 It has been reported that Tim Howard produced his 150th clean sheet in Europe as Everton defeated Lille 3-0 in the Europa League on Thursday night.

The 35-year old USA goalkeeper notched the milestone at Goodison Park as the Toffees remained top of the Group H table.

Howard’s milestone shutout comes more than ten years after making his debut for Manchester United in 2003, however, a vast majority of the clean sheets have come for Everton during his 360 appearances for the Merseyside club.