It has been reported that Tim Howard has decided to take a break from international football. 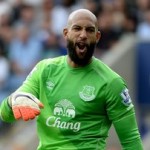 The Everton goalkeeper has revealed that he will not be available to play for the USA national team until September 2015 after discussing the idea with manager Juergen Klinsmann.

“Having played overseas for the last 12 years and missing out on spending time with my family, making this commitment to my family is very important at this time,” Howard said in a statement released by US Soccer.

“I am grateful for the willingness of both [U.S. Coach] Jurgen Klinsmann and Everton Manager Roberto Martinez to afford me the opportunity to spend time with my kids.

“It’s the right decision at the right time. Jurgen has always been up front with all the players in saying you have to earn your place, which is something I agree with, so I look forward to coming back next fall and competing for a spot.”

35-year old Howard made his international debut in 2002 and has gone onto make 104 appearances for the USA.