Reports are out claiming that Everton are in Barcelona talks for Alex Song. 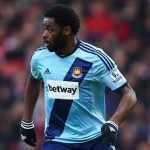 The Cameroon international enjoyed a successful year on-loan with West Ham United last season, but a return this summer has stalled over injury problems.

Spanish sources claim that Everton have now picked up the baton and opened negotiations about a deal for the Cameroon international.

Everton have slapped in a €5 million bid to close a deal for Song.

Everton and Barcelona enjoy a good relationship, with Gerard Deulofeu having moved to the Merseysiders this summer.