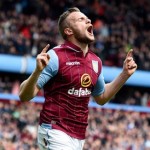 Reports are out claiming that Everton have commenced negotiations with Tom Cleverley according to reports.

It is believed that the Toffees have opened discussions with the 25-year old midfielder who is out of contract at Manchester United at the end of the month.

The central midfielder enjoyed a positive season-long loan spell with Aston Villa, making 37 starts in all competitions, prompting Tim Sherwood to suggest that the West Midlands wanted to sign him permanently.

However, Everton boss Roberto Martinez has made the first move for the 13-time England international who played on loan under the Spaniard at Wigan Athletic in 2010/11.