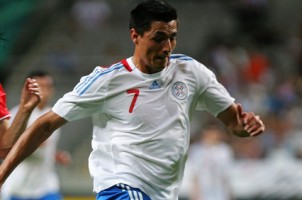 Everton manager David Moyes has been reported to be keeping a close eye on Benfica’s Paraguayan international striker Oscar Cardozo.

Local newspapers have reported that Moyes was at Benfica’s Stadium of Light Stadium in Lisbon on Saturday to see 6ft 4ins Cardozo score the winning goal from a penalty in a 1-0 league win against Belenenses.

Moyes was also in Portugal to see UEFA Cup opponents Sporting draw 0-0 at Pacos de Ferreira on the same day, but took advantage of the opportunity to watch Cardozo.