Reports are out claiming that Everton are inviting offers for Steven Pienaar. 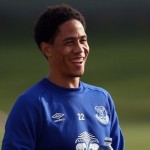 The People reported that Everton open to bids for the former Borussia Dortmund and Ajax star.

The Ex-South Africa international has made just three league starts this season and the Toffees will listen to offers.

Pienaar, 32, is in his second spell at Goodison, following a brief move to Tottenham in 2012.