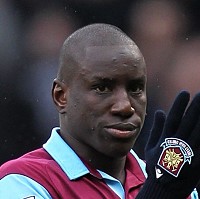 It has been revealed that Everton are interested in signing Senegal striker Demba Ba.

The Daily Mail has reported that the Toffees are ready to make an offer for West Ham United’s Ba – despite the controversy over Sunderland’s alleged interest.

The Premier League is probing claims from West Ham accusing Sunderland of ‘tapping-up’ the Senegal striker.

Everton, who came close to signing Ba in January will not be deterred by the furore and are ready to explore the possibility of a deal with David Moyes desperate to add more firepower to his squad next season.