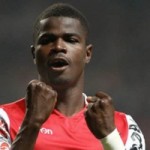 Reports are out claiming that Everton are interested in signing FC Braga defender Elderson Echiejile.

The Mirror revealed that the Premier League side have identified the 25 year old left-back as a possible replacement for Manchester United target Leighton Baines.

Baines, 28, continues to be linked with a switch to Old Trafford which would see him reunited with his former boss David Moyes.

Toffees boss Roberto Martinez is privately bracing himself for the departure of the England full-back and is drawing up contingency plans. I Had No Chance At Manchester City – Gareth Barry