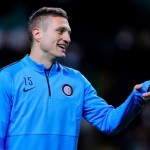 The Daily Star Sunday says the Toffees are said to linked with a surprise bid to bring former Manchester United skipper Vidic back to the Premier League this summer.

Martinez needs cover at the back with speculation over the future of John Stones, 21, who has been the subject of interest from both Chelsea and Manchester City.

A switch back to England would suit Serbian Vidic, 33, after an unsettled first season with Inter Milan in Serie A.