The Sun has reported that Everton manager Roberto Martinez is eyeing Arsenal goalkeeper Wojciech Szczesny as a replacement for MLS-bound Tim Howard. 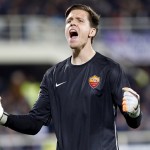 The Poland international goalkeeper is currently on a season-long loan spell at Serie A club AS Roma but is expected to return to the Emirates Stadium in the summer.

With USA international Howard being heavily linked with a summer move to the Colorado Rapids, Everton are on the hunt for a replacement and could make a move for Szczesny at the end of the current campaign.

The 25-year-old was loaned to Roma following the summer arrival of Petr Cech from Chelsea.