Reports are out claiming that Everton midfielder Ross Barkley would love to taste Champions League action next season. 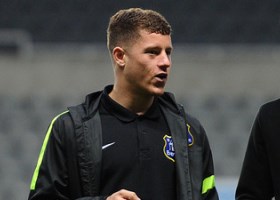 The young England international is confident he will not freeze on the big stage if Everton grab a place in Europe next term.

He said: “One of the last times we played in Europe, I was a ballboy at Goodison. It was against Fiorentina and, although I remember being freezing cold, it was a great experience because the atmosphere was fantastic.

“I just know that if we get into Europe and I get the chance to play in those games, I will remember those nights.

“When I go to fetch the ball and the ballboy throws it to me, I will be thinking, ‘This could be you on the pitch in a few years’.” Sir Alex Ferguson Delighted With The Form Of Rio Ferdinand