Reports have emerged claiming that Everton boss Roberto Martinez has made a move for Valencia midfielder Ever Banega. 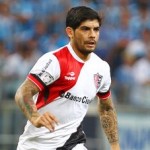 Super Deportes reported that the agent of Banega has fielded an approach from Everton for the Argentine.

Valencia are looking for a buyer having allowed Banega to take in a six-month loan spell at Newell’s Old Boys.

The Argentine international has been a target for Everton since the days of David Moyes.